Less More
1 year 5 months ago - 1 year 5 months ago #65871 by Schol-R-LEA
Schol-R-LEA created the topic: Sambar (South Indian style lentil and vegetable soup)
I've been meaning to try this out for a while, as I've always liked sambar when I've had it in restaurants (there is also a decent but not great foil packet version , but it doesn't hold a candle to a freshly prepared one, and various canned ones which I haven't tried). Turns out to be pretty easy (if you can get the ingredients), and not all that long to make.

(Fortunately for me, Athens, GA has some excellent international grocers, with my favorite being Fook's Foods. In any case, even some more upscale conventional supermarkets here carry most of the things I'd need - including, to my surprise, the local Kroger, which has a surprisingly large international aisle for an otherwise pedestrian supermarket - and online sources for the canned and dry goods are pretty reasonable for what they don't. I'll give some links for Amazon's offerings, but I'd suggest looking for any local stores first.)

I was (mostly) following the recipe from here though I had to improvise a bit as I lacked some of the ingredients and added others which weren't exactly traditional. Also, I was making a double batch, and wanted to increase the amount of vegetables relative to the whole, too. I came out pretty well IMAO.


I soaked the two types of lentils in a large bowl for 30 minutes, stirring the occasionally to keep them from clumping, them added them to a 3 quarts (~3L) boiling water in a pot with the turmeric and half of the salt. I cooked that at a medium simmer for 30 minutes while preparing the vegetables and spices.

After dicing the fresh vegetables and setting them aside, I tempered the spices (minus the sambar powder) by stirring them in a pan with the oil for about a minute. I then slowly stirred in the fresh vegetables, the tamarind base, the sambar powder, and finally the frozen mixed veg. before adding 1 cup of water. This was set on a low simmer for 5 minutes, then added to the pot of lentils. The whole was set to a low simmer for 20 minutes.

This was served as a side dish with a pork tenderloin roast and some white rice the first night I had it (last Wed.), but it keeps pretty well when refrigerated - I am eating the last of it right now for lunch, as a matter of fact.

While a soup may sound crazy in the heat and humidity of a Georgia summer, I figured one from an even hotter clime would be well suited, and as it happens the dish does pretty well either hot or chilled.

I probably should invest in a pressure cooker, though, as it takes a lot longer if you are just simmering it in a regular pot. Given all of the Indian dishes (and bean/lentil/legume dishes in general) which I make, it would save a lot of hassle.
Out, damnéd Spot! Bad Doggy!
Last Edit: 1 year 5 months ago by Schol-R-LEA.
The following user(s) said Thank You: Mister D

Less More
1 year 5 months ago #65872 by Schol-R-LEA
Schol-R-LEA replied the topic: Sambar (South Indian style lentil and vegetable soup)
This is a picture of how it came out which my friend Carmen took. 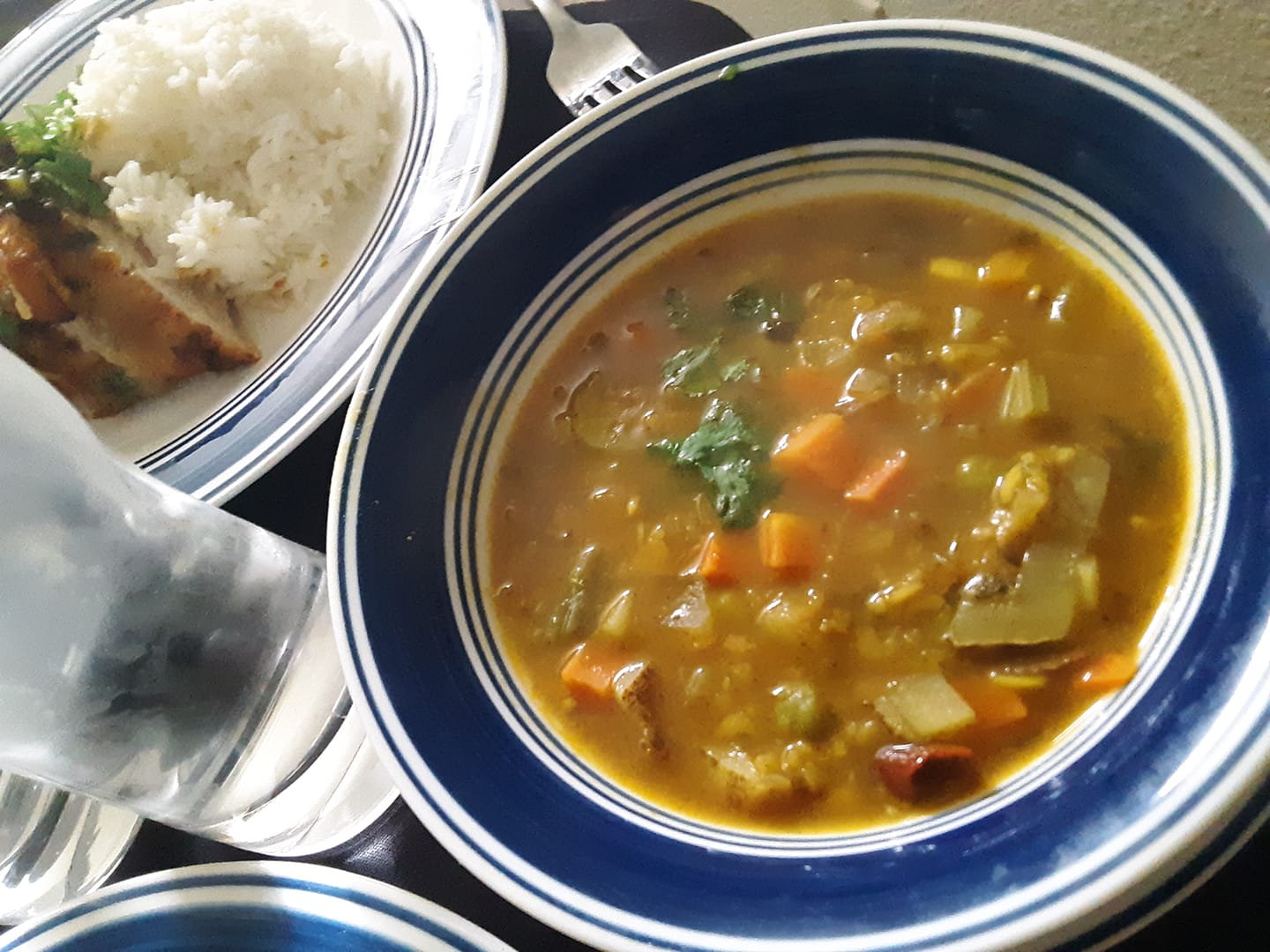